We were about half-way through the week-long annual event called “Shootist Holiday” when one evening, after the guns had been put away, I and several friends were sitting around chatting and enjoying a nice single malt scotch.  Before long, the conversation landed on the big bore revolvers that most of us shoot and how spending a week shooting them just wasn’t as much fun as it had been when we were younger.

The vast majority of my revolvers are set up for big game hunting and include .41 and .44 Magnums, .45 Colts, .454 Casulls, and .475 Linebaughs.  While some of my friends have lighter target loads for their guns, I believe in one load for a gun.  So I am always shooting full power hunting loads when I shoot these guns.  We determined what was needed was a low-recoiling, “target-type” revolver that didn’t need the power to kill deer, elk, or bison but was just a pleasure to shoot.  By the next morning, I had some ideas in my head about what the perfect target revolver would look like.

Years before, I had been to the Cody Firearms Museum and had seen Bill Ruger’s personal Ruger Bisley.  It was 100% engraved, had ivory grips and gold inlay, but the most striking feature to me was the grip cap.  A feature not seen on handguns anymore.  Also while at the museum, there was a travelling Colt exhibit in which I had seen my first Colt Target Bisley.  I have seen and handled numerous Colt Bisleys, but the Target Bisley was new to me.  It was a flat-top with a dovetailed rear sight (drift adjustable for windage).  The front sight was a two piece setup with the base permanently attached to the barrel and the blade pinned into the base.  By removing the pin, one could replace the blade with differing heights for elevation adjustment.

Later that day, I sat down with my good friend, gunsmith Milton Morrison, and he and I talked about the concept.  Milt had already built two full custom revolvers for me and I felt he would enjoy building this gun.

I wanted to incorporate the grip cap idea I had seen on Bill Ruger’s Bisley and the flat-top and unique sights of the Colt Target Bisley.

I liked the idea of starting with the Vaquero, specifically the New Model Vaquero that Ruger had introduced back in 2004.  It had the smaller, more graceful lines of the original .357 magnum Blackhawk frame.  Milt was, however, more than a little hesitant.  The amount of work to replicate the flat-top and the dovetailed rear sight of the Colt would be prohibitive.  We decided if we were going to proceed with this project, it would be best to start with a standard Blackhawk which Milt would just have to mill off the protective rear sight “ears”, weld up the slot where the adjustable sight sits in the top strap and cut a dovetail for the new sight.

As summer progressed, I could not stop thinking about a true target revolver.  I wrote down all my specifications (except for caliber) and drew up my visualization of the gun on the computer.

It would be my take on the Colt Target Bisley:

While I was planning the gun, I remembered that Ruger had built a 50th Anniversary .357 Magnum Flat-top back in 2005 and it was the same size as the original .357 Magnum Blackhawk. The amount of rework on the sight area of the top strap would be minimal. I checked with Milt to see if the Anniversary gun would work and he said “yes”. I asked him if he wanted to take on the project and, again, he said “yes”.

I started my hunt for a 50th Anniversary .357 Magnum Flattop.

Luckily, my local gun shop was able to quickly find a new-in-the-box one for me.

The next year’s “Shootist Holiday” saw me giving the gun, my specs, and my drawings to Milt and over the course of the week, Milt and I talked a great deal about the project; refining details, finalizing specs, etc.  But even as Milt took the gun with him after Holiday was over, I still had not decided what caliber to build my Target Bisley.

I finally narrowed down my choices to the .44 Russian or the .41 special.  The .44 Russian, with its first use of an internally lubricated bullet, is the grandfather of all modern cartridges and would be very appropriate for a modern take on old style target gun.  The .41 Special is a modern wildcat that I felt would be right at home in a modern target gun.  I was leaning heavily towards the .44 Russian, but when Milt called me to tell me had done almost everything he could to the gun without knowing what caliber he was building it in, I told him to build it .41 Special (A choice I have not regretted).

While Milt and I were on the phone, we discussed more of the particulars about the gun.  Originally, I had planned the grip cap to be all steel (either Black Diamond or color cased hardened); with a silver medallion on the bottom.  Milt suggested that we do the grip cap in stainless steel.  I liked the idea and added that we could inset an ivory medallion with some scrimshaw.  I bought several pieces of ivory to send to Milt for him to determine size and shape of the medallion.  The next time we talked, Milt suggested we make the grip cap out of silver and use the largest piece of ivory possible.

After Milt cast the silver grip cap, and shaped the ivory to it, he sent the ivory back to me to get the scrimshaw done on it.  I had purchased the ivory from a scrimshaw artist that I have known for 30+ years and when I got the medallion back from Milt, I sent it to her to have the work done.  She is one of the best scrimshaw artists in the world, and as I trust her work, my instructions were simple: A wolf head, not howling, cover as much of the ivory as possible.

Early in the process, I had decided not to put real ivory grips on the gun, so after the grip cap was attached to the grip frame, Milt sent the grip frame to Bar S Grips (www.truivory.com) to have them fit a set of their Tru Ivory grips.

Milt delivered the gun to me, appropriately, at Shootist Holiday and completely surprised me with a custom made, wood, presentation case.  When I took the gun from the case, I was overjoyed.  The gun is absolutely gorgeous and exactly what I had envisioned.

It is my take on and Milton’s execution of a modern Target Bisley.  And it can SHOOT! 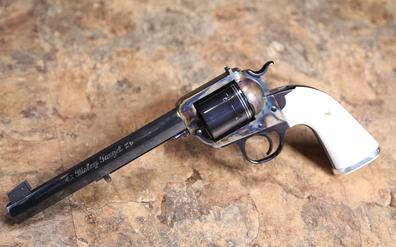